So this kind of cracked me up... my studio was featured in a new book- Artists Homes and Studios- and one of the other artists in it wrote about several of the studios in her blog. Guess who made her blog? BEAR!
cracked me up. 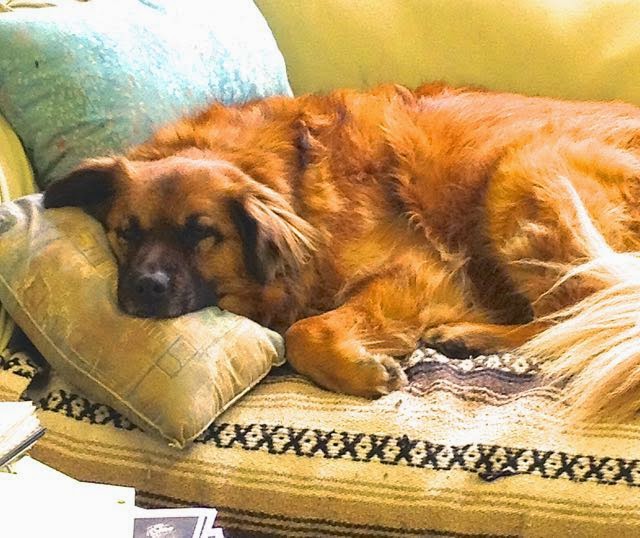 But seriously- can't wait to preview this book!! I haven't gotten my copies yet....
Get your signed copy at our book signing open studio at Nina Weiss's studio!
https://www.facebook.com/events/784357721648730 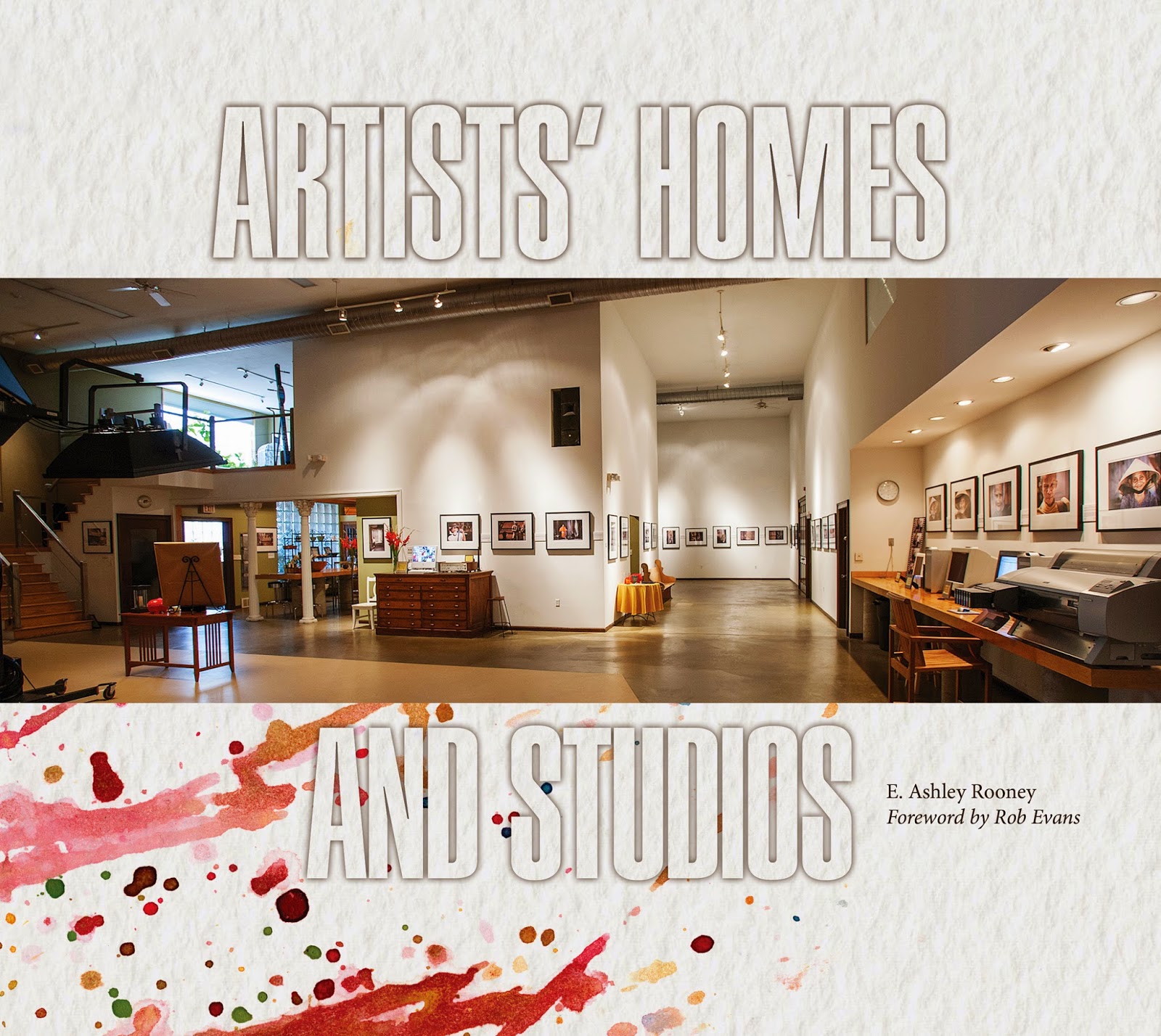 Posted by Cheryl Holz at 6:09 PM No comments:

So one of the materials I've had success with before and wanted to revisit were my pan pastels.  Absolutely LOVE the smooth blending you can get, and they adhere to the encaustic surface beautifully. I found that it does need to be fused and another layer added to protect it-but I  still love the material and how it reacts to the wax!
I am liking where this is going, but wondering if its done or not.  My instincts are making me hesitate, recognizing that feeling that I may be going too far if I continue... So here is where it will stop for now, while my subconscious works on it when I’m doing other things.  But I’m putting it out there showing  how it evolved, step by step…for now! 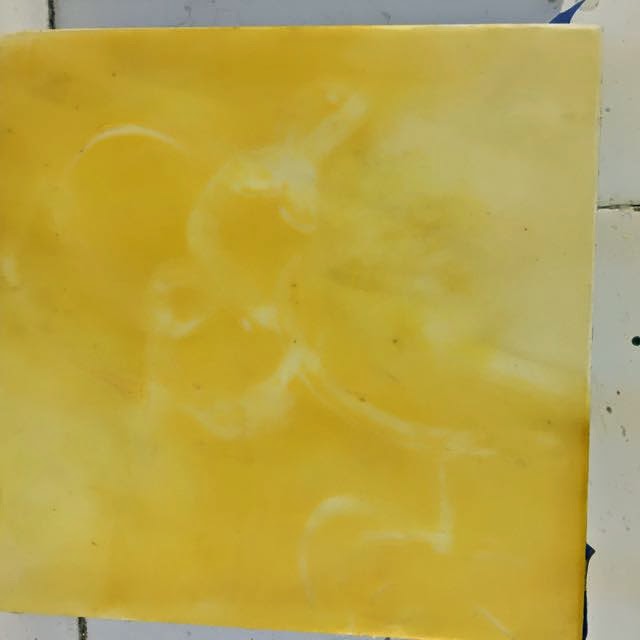 ...then added some heat and watched it move the pigments around! 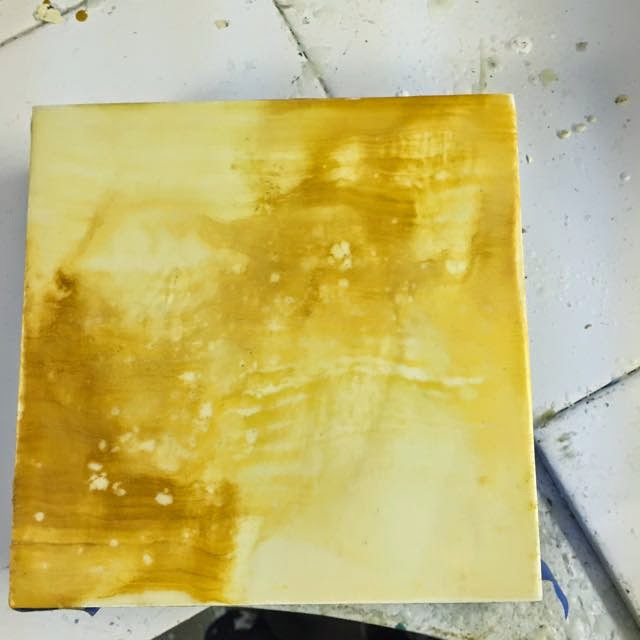 added a second color, and accidentally scraped some off- but loved the marks it left- so leaving that... 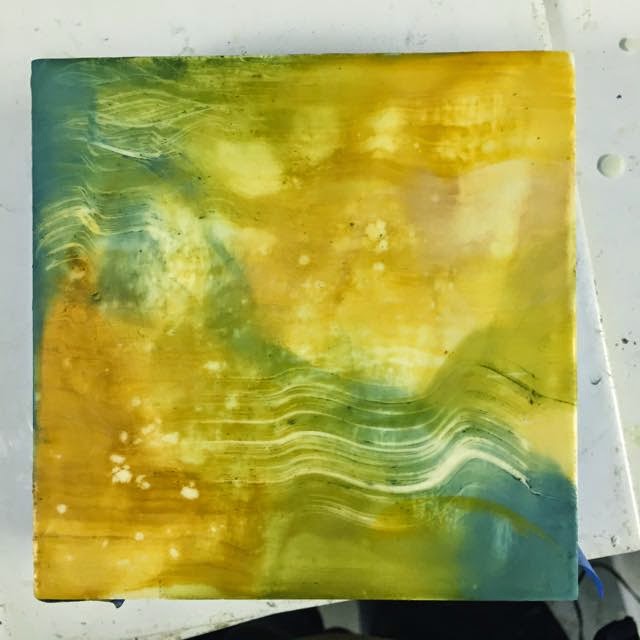 now for some fun with graphite!  fingers, end of brush, pattern making tool and stamps all leave wonderful but very delicate and tenuous marks on the surface,,, 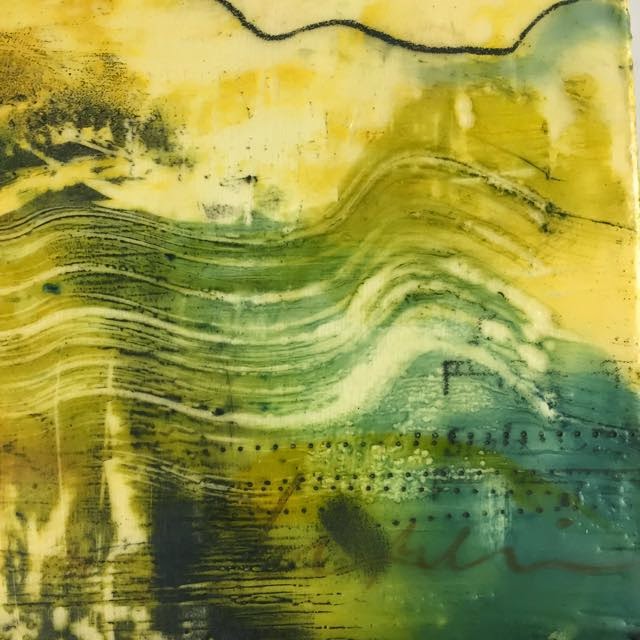 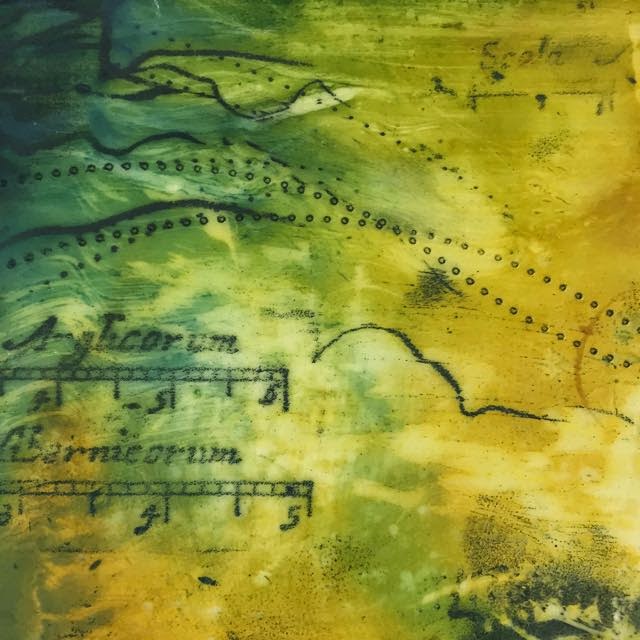 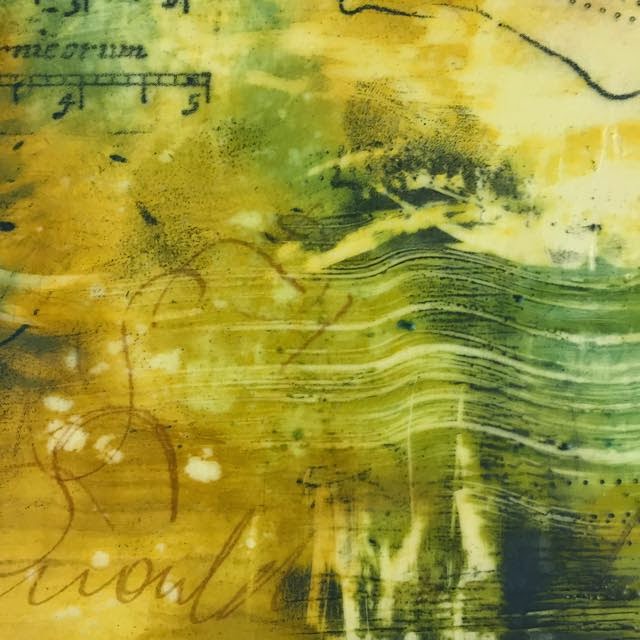 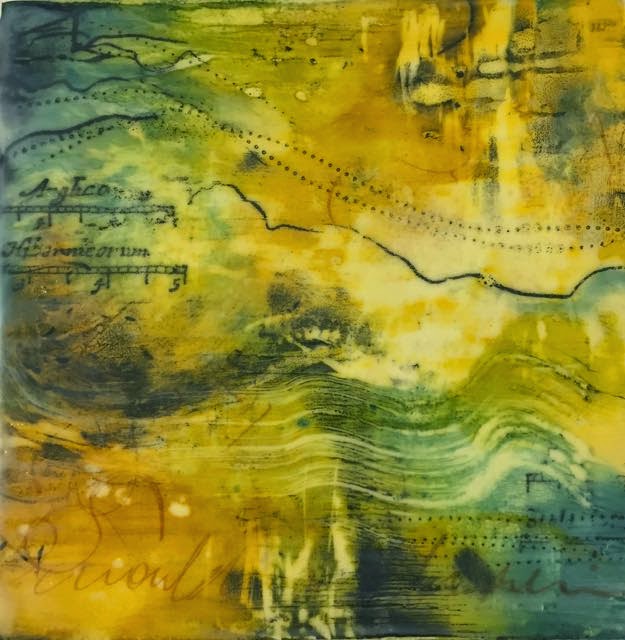 Posted by Cheryl Holz at 6:06 AM No comments:

So I started out my creative year on the studio couch, I know sounds like is an inauspicious start to the new year, and makes me sound like a slacker - but I confess I really look forward to my “couch sessions.”  I rarely sit on the couch in the studio, partly because one of the dogs usually has already claimed it, but mostly because I am never sitting for long.  I wish I could work sitting, and for some small details, I can- but for the most part I need to be up and moving around, pouring from several feet above, building out a box, or fusing with a blowtorch that has to be looked at from many angles… but I digress.  The reason I look forward to my couch sessions is because that is the time I allow myself to take a look at all the plans I have drawn and listed in my sketchbook, look at all those artist postcards I’ve picked up, and really delve into that new art/nature book I’ve been dying to sit down with… and new this year, I allowed myself to be sucked into pintrest. Oh my god. I know, I know, I’m the last person on the planet to play with it- but it really IS addicting…and so artist friendly. 90% images, 10% words.  (not that we don't read..) .  SO much artwork out there….at any rate- I flood myself with images and ideas, coming from any number of sources.  Many are recurring themes or processes or “things that have been done before” (by me or others), but what I like to do is gauge my reactions to all of them again, and whatever makes me most excited wins and gets to be made!  What doesn’t excite me any longer either dies in the back room, or gets recycle/reworked into another piece.  An art survival of the fittest, in a weird way.

So the result of the couch session is usually a list in my sketchbook- I am an avid list maker.  I compile all the images, processes, or formats I want to try or do again. …And some rough sketches of pieces I’d like to make.  Usually by that time I am oh-so-excited to get off the couch and get started!

This year, much of my list centered on encaustic, and learning more about it. The more I learn, the more I love. It is the most versatile medium ever!  Its molten fluidity lends itself well to abstract painterly patterns, mimicking patterns found in nature- but you could also sculpt with it! Crazy fun.
SOOO- there are so many materials/processes/approaches I want to try! I admit I am addicted to new processes.  So how to do that without looking completely schizophrenic? (Not that I ever really cared about that.) I’m going to use the same format- 6x6x2 boxes-and run them through my “filter” -or my way of seeing things, my choices, my inclination and preferences. I’m shooting for 30.  It’s in an intimate scale that doesn't require a huge commitment (that being said, I’ve worked longer on some 6x6’s than 16x20’s- I want to throw the whole art by the square inch theory out the window) but at any rate it tis a good place to start. So- here goes.  Daily was my original goal- but trips are booked and workshops scheduled that wouldn’t allow me to start until March- and I couldn't wait that long! So I started this series the first week of January…

My goal was to post them as they happened in “real” time, but I confess I am blogger /procrastinator.  I love to make the work, but have to force myself to sit down and write about it.  I put off writing this introductory bit, but now that it’s done, hopefully form here on out it will be more pictures and less words-

Here is the first one….
So I always want to jump right in and get started with the good part- and skip the grunt work -taping, priming, sanding, sealing.  Ok, I admit that type of work does have a place in the creative purpose- obviously physically necessary, but I also think it primes your mind for the upcoming piece. That being said- after priming 3 panels- my pump is primed and I’m ready to start!

So- while warming the wood to receive its first layer, I thought- why not draw with the blowtorch? It was highlighting some beautiful grains in the wood…so that's what dictated the direction and palette of this piece. I needed/wanted a strong diagonal, so tilted the panel as some burnt sienna ink ran down-Drizzled more inks, encaustic paints and then played with the torch to explode them and disperse… seeing warm brown fuzz of a bee’s back- and the golden warm honey colors lead me there too.  Off to find a bee…. 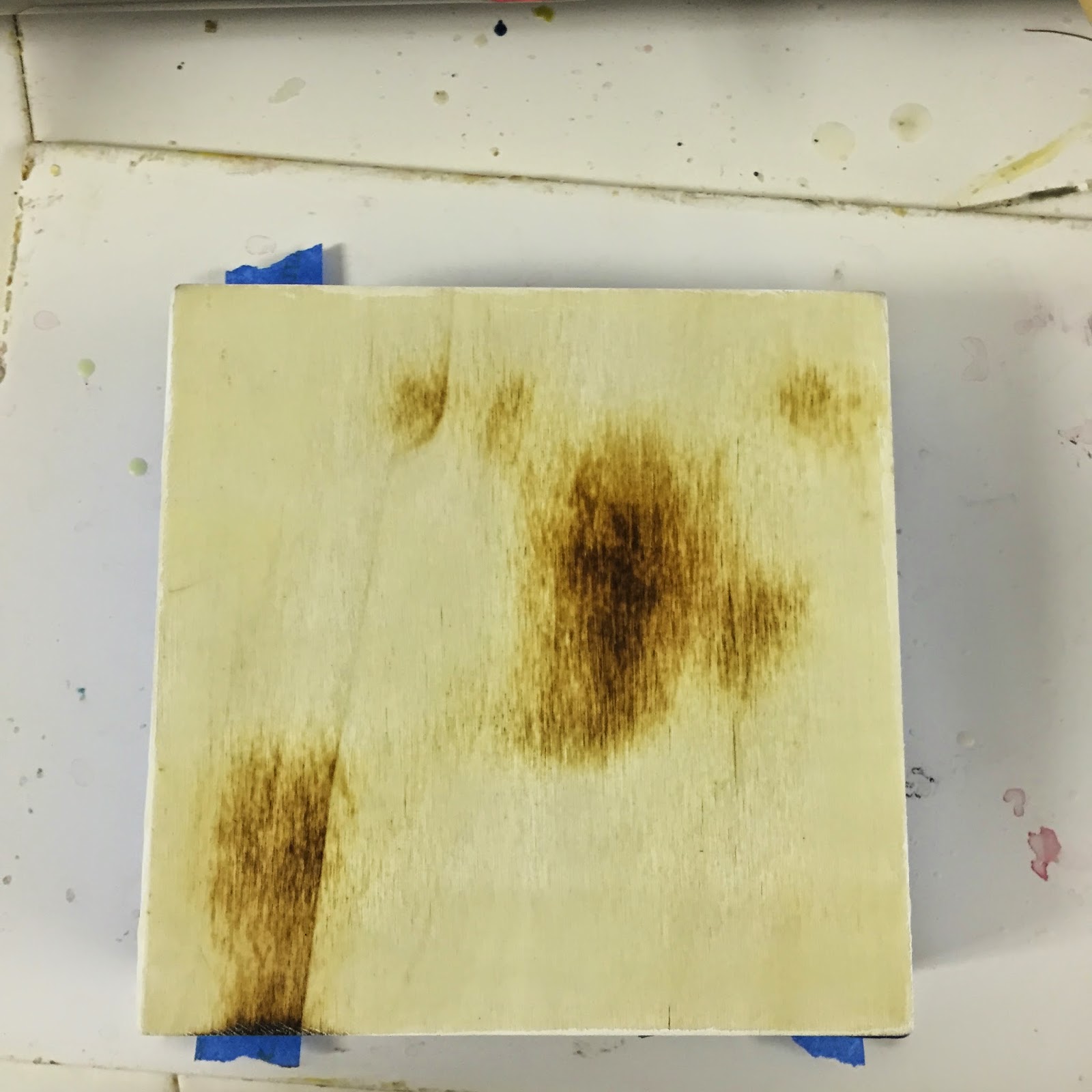 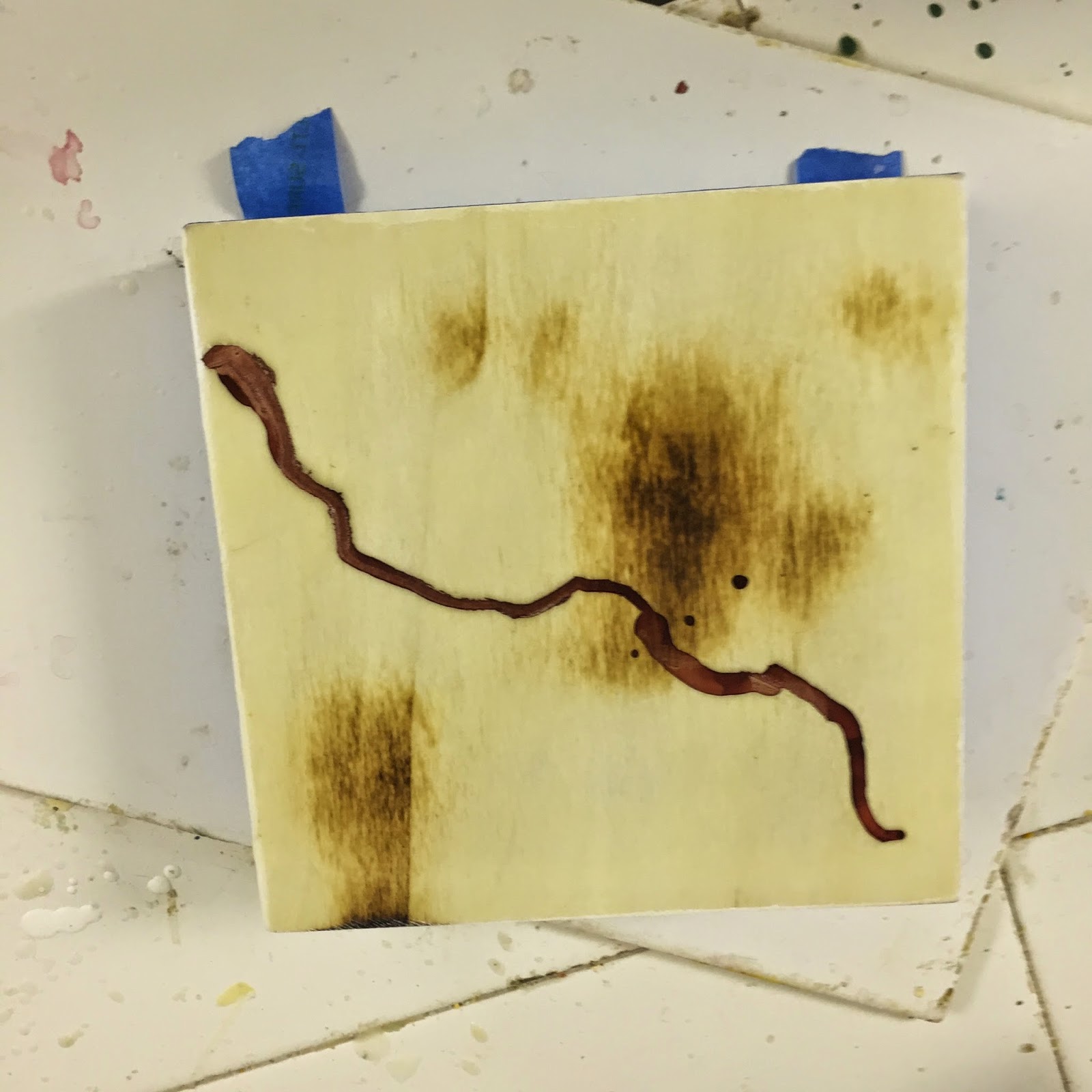 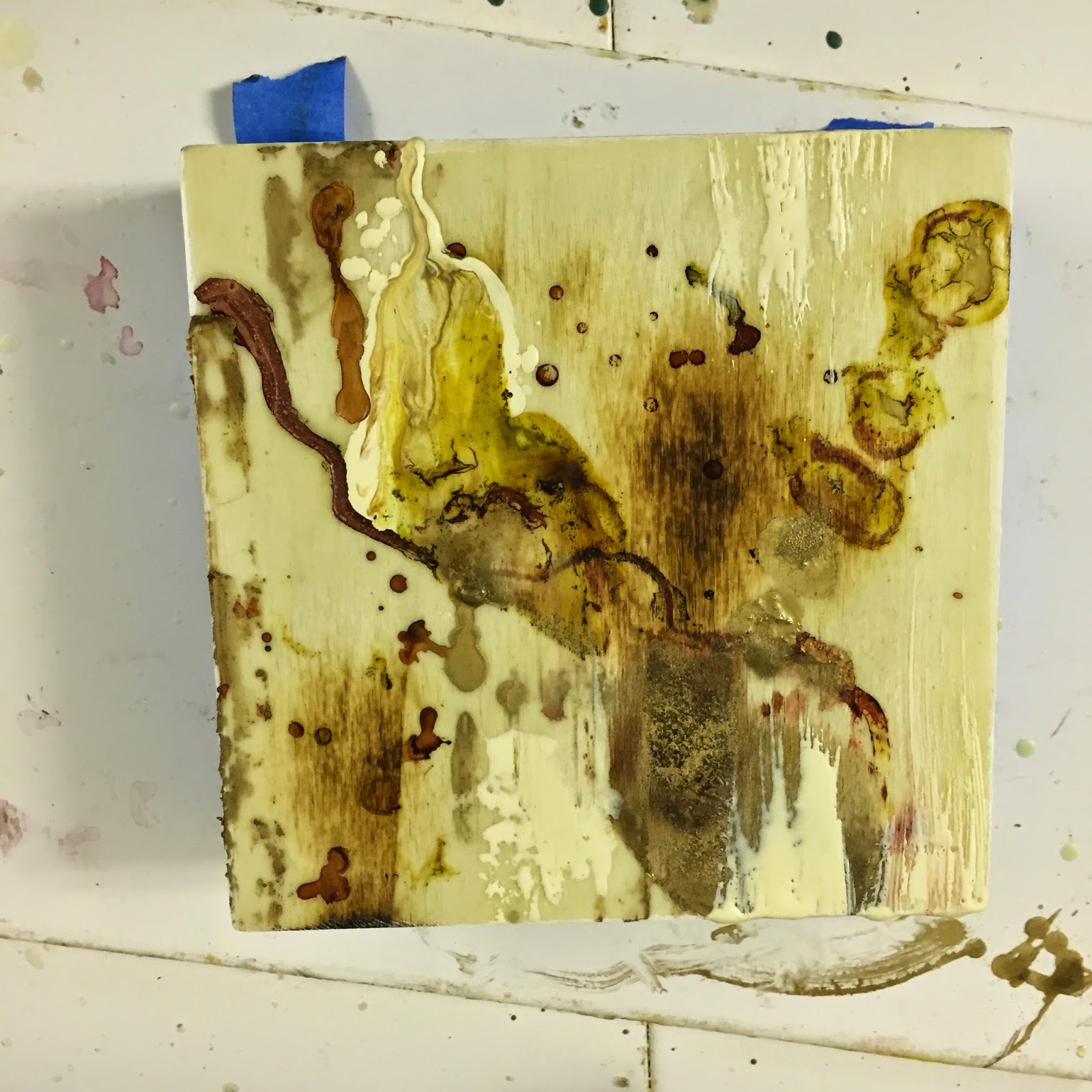 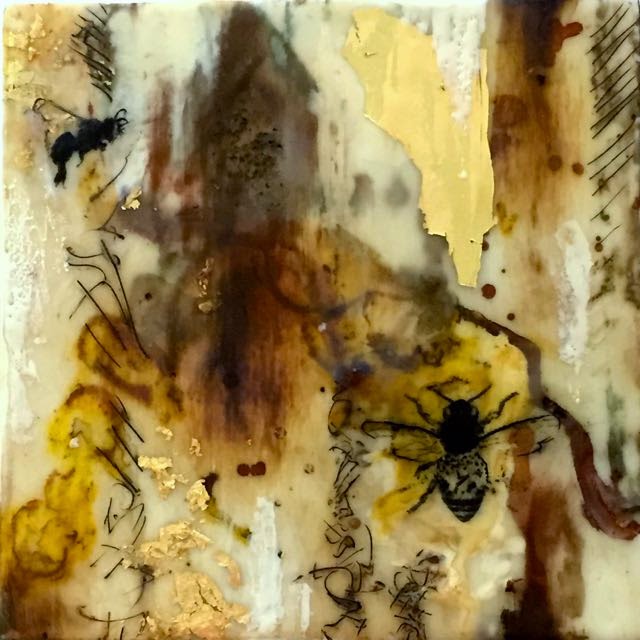 Here’s where it’s at now.  Not sure if its completed yet- will need to stare at it for a while to see if it feels done. But it’s a start!