Finding Joy in the Planning Process

Although I no doubt love a good studio day where I'm getting dirty and pouring inks and paints, selecting twigs or firing up the blowtorch – I also relish some "couch time" with my sketchbook, stack of art books, and iPad, taking time to consider my next series of group of works.  I look at all the plans for pieces I have yet to make in my sketchbook, images collected from other artists whose I admire, and try and figure out what it is I should be doing exactly at this point in life, career, and the state of mind I'm in.   I have a lot of delicious big tasks in front of me, and I took the afternoon to sit down and organize my thoughts, crank some good tunes (the goo goo dolls were calling me this afternoon), sketch out some ideas, look at past plans that I could incorporate in, and allowed myself to cruise Pinterest for a short time. 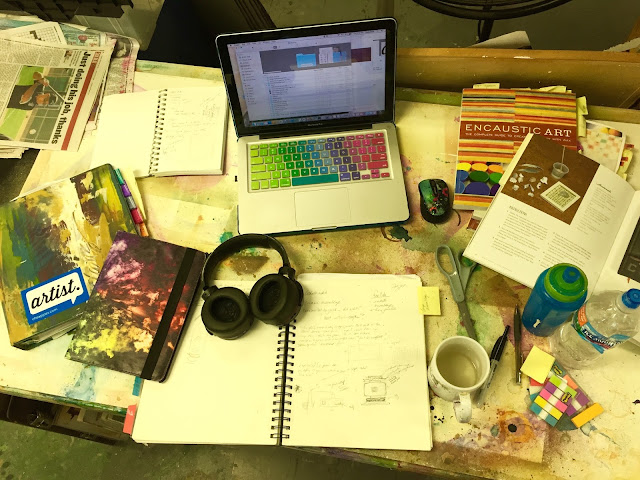 There is a total freedom in imagining things, and you're not delayed by drying time, technical difficulties, or supply concerns. Just free reign, working as fast as your mind can imagine! It’s glorious.  I just try to keep up in my sketchbook (although I always fall short), capturing as much as possible on the page.

I leave energized and ready to tackle the next big thing.

Which is what??  Assemblage/ totems is where I’m at.  I have always said I keep a toe in sculpture, and now I guess you could say I'm up to my ankles. Most are still wall hangings, but they will be much more sculptural, and able to incorporate (I hope) in a cohesive spiritual way all the natural materials I've been working with all summer on my fairy houses, panels of paintings, and shapes of textured surfaces that could be anything for encaustic to acrylic to ceramic.  It think it’s a good way for me to merge all my interests into one.  When I look back- I have been going back to "totem stacking" for over 20 years- I made a large paper cast from a clay sculpture in grad school, I made a totem vertical rectangular series 10? years back, tiny assemblages last year, so now the seems like the right time for this next progression of my work!

So I started pulling out my works in progress, lumber, found objects and played with them, stacking, selecting arranging.... 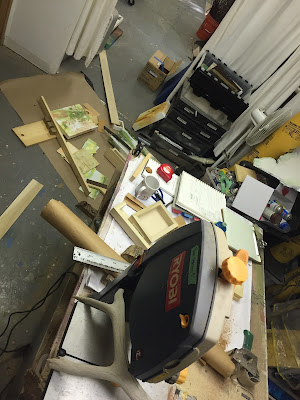 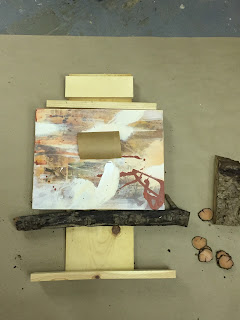 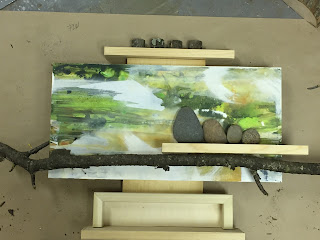 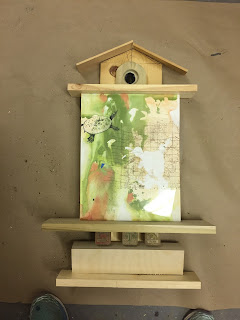 Posted by Cheryl Holz at 8:07 AM No comments:

It's that time of year –I always end up making a little bit of wedding art during the summer months. This year however, things took a little bit of a different turn when my niece Angie and her bride Maria asked me to create an alternative guestbook for them. At first we talked about using barnboard, but I thought the surface would be too rough for people to sign legibly. So they let me go off on my own tangent and make whatever I want. I loved their invitations, and thought it made sense to incorporate them. I contacted their friend who is the graphic designer who created them, she gave me the font types, and I made a slightly larger altered version to include on their guestbook. Their colors were orange and blue– which initially I found very challenging. But I thought fall rust leaves, and went with that. It was kind of hard to not get textural-but I like the distressed two dimensional effect. I think they did as well. And once I saw the old lodge they were having the reception, it fit perfectly! 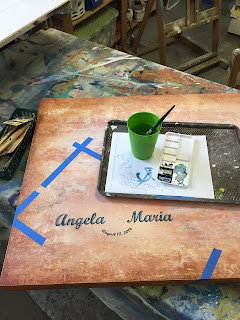 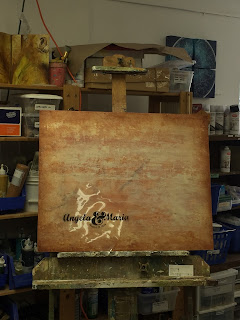 "auditioning" the placement and size of the logo before silk screening, and embellishing with inks. 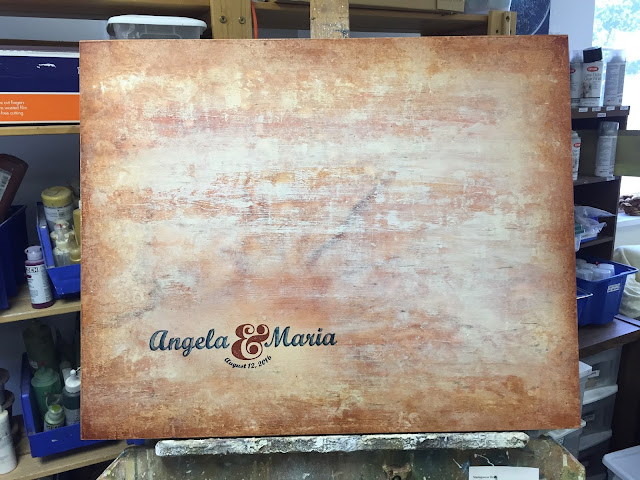 The"final" piece- before signatures of course!

Then it was onto the actual wedding gift! These two met in the Army, so that had to be included cause it's been a big part of their life for years. They met in San Diego, so a map of that was included as well. I included part of their wedding timeline on the side and use their wedding colors.
Encaustic paint encapsulated the whole thing so would last as long as they do! 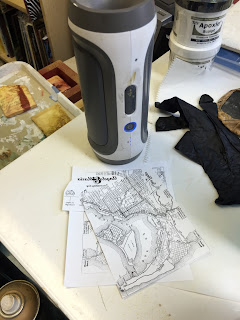 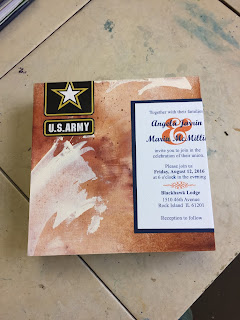 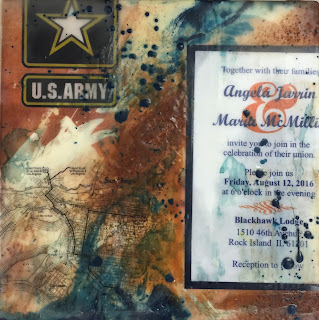 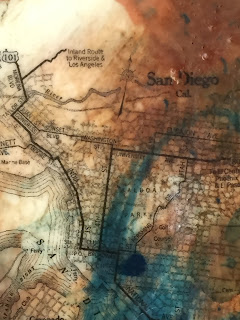 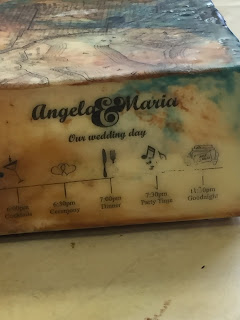 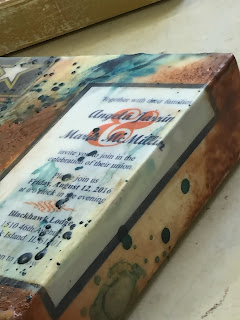 .... and just when I thought I was done, while  I was helping to set up the reception hall,  they asked me to do some last-minute signage for them. This saying that they wanted cracked me up! 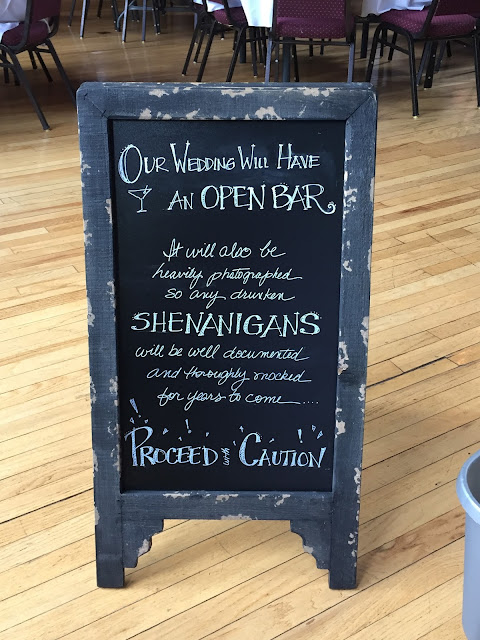 Needless to say, shenanigans did ensue...
But I love my big crazy extended Dougherty family!! 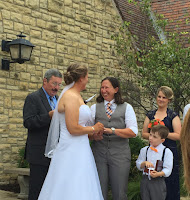 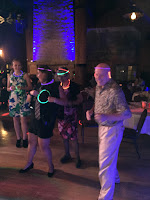 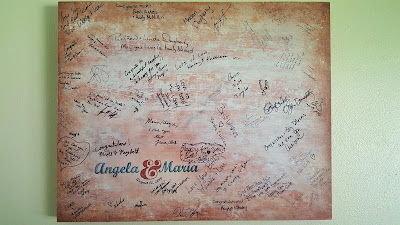 Posted by Cheryl Holz at 3:21 PM No comments: