I start several and then see who's yelling loudest for the next step.  The neediest and most exciting one wins! So I will continue in no particular order, starting with todays' favorite, because it was particularly satisfying- and not only because I started and finished it in one day, (very rare for me) but also because it was personally very cathartic for me.

I arrived at the studio later than I intended, dragged down not only by a persistent head cold, but family drama. Had to do about 2 hours of putting away work from last weekends fair, (DRAG CITY MAN) so played a fun music mix to help buoy my spirit. Soundtrack is very important to me, to put it mildly. But when I finally had cleared away a workspace and had wax melted and ready to go- the songs felt frivolous.   I kept switching, being a rather schizophrenic disc jockey for about a half an hour, trying on the atmosphere and mood of each song, until I happened upon Joan Osborne, a bluesy singer songwriter I've been fan of for a long time. Her music- AND her lyrics hit home, hearing them in a completely different context than I ever had before.  They were strangely fitting for our situation, so I included them in my piece. And that is what I love about art, be it a song or a book or a painting-if the maker is honest and true to herself and the work- there is a good probability that someone else in the world has been in a similar situation and can relate.  And THAT is what makes it universal.
I think those who intentionally try to address the universal in a lofty academic way miss the boat.  But I digress…. back to the piece.

I had a rather neutral start with some ochre and cream, so added some gold- found in a lot of churches in one form or another..... 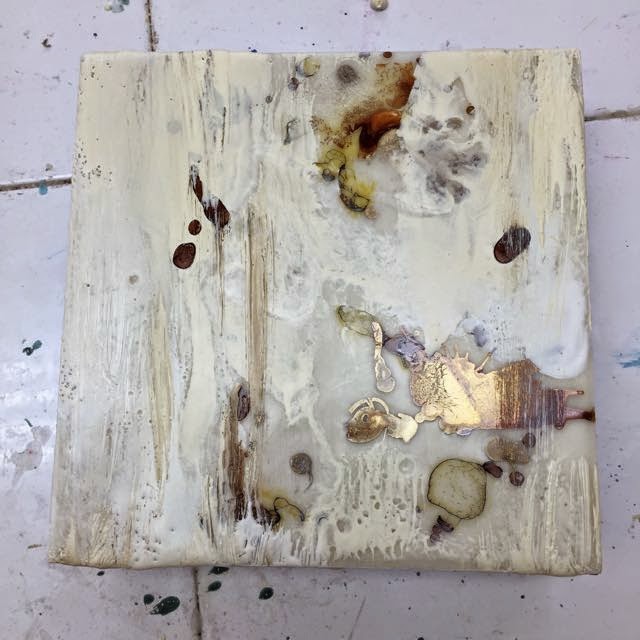 Then added some shellac and pigment, and set it afire. …Lighting a prayer candle? 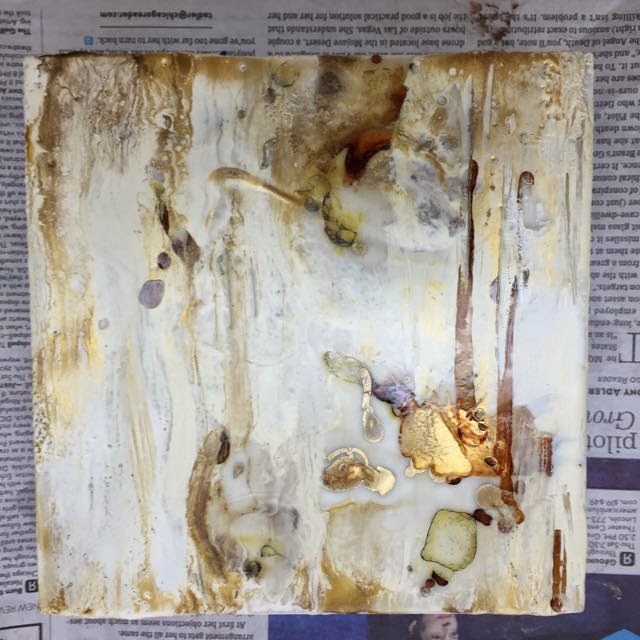 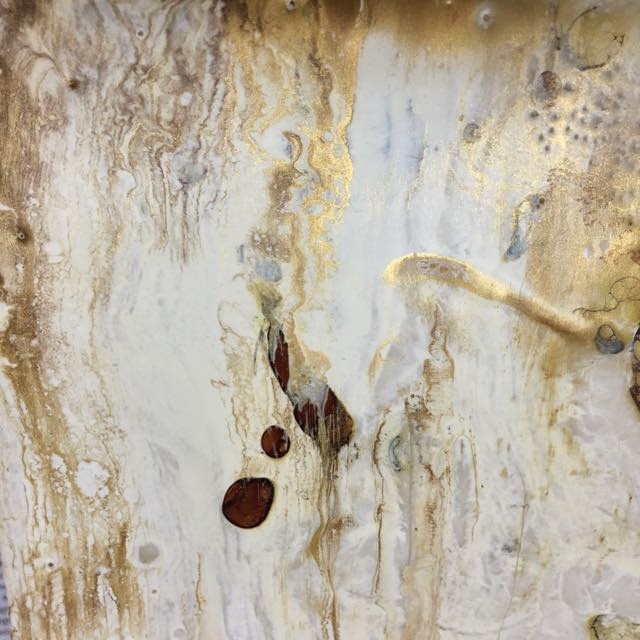 ...and wrote these lyrics into the piece:

Preacher was talkin' there's a sermon he gave
He said every man's conscience is vile and depraved
You cannot depend on it to be your guide
When it's you who must keep it satisfied
It ain't easy to swallow, it sticks in the throat
She gave her heart to the man in the long black coat 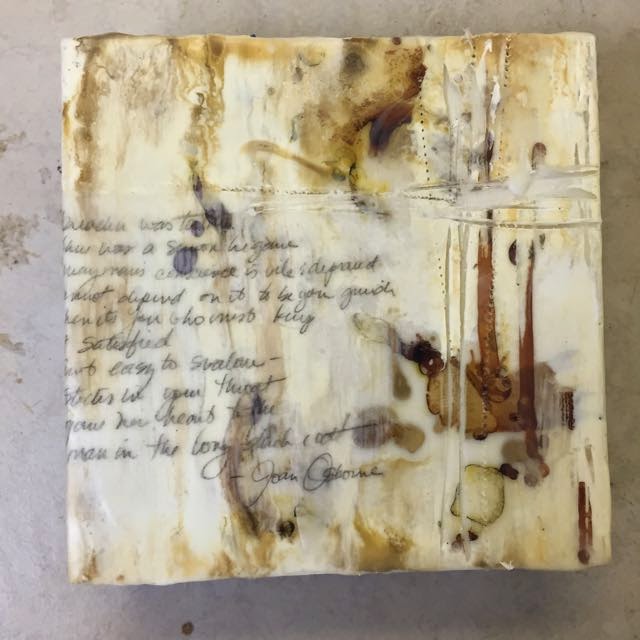 Then I etched in a crude Celtic cross…
And stained it. 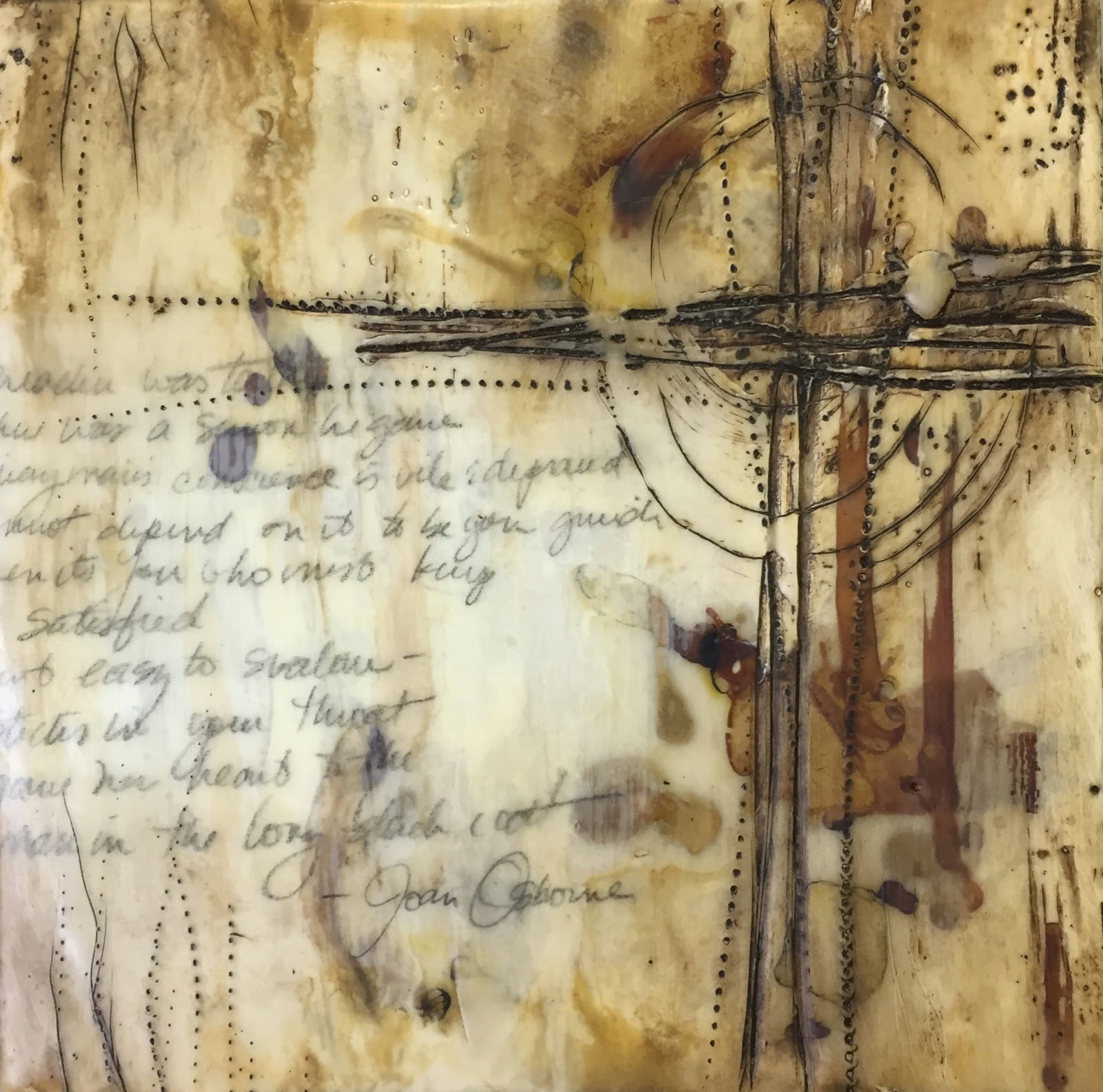 A little dark?
Sure.
But perfect for today.
But by the end I was dancing as I torched and carved,
andI left the studio feeling lighter and happier, unburdened-
at least temporarily!
Yes, I believe in art therapy- and practice it.

Here's Joan Osborne's version of the song that inspired this piece.....

…and speaking of missing the boat- I may have as well, but found what I needed to anyway. While looking up a link to paste in here- I discovered that it's a Bob Dylan cover! I did not know that, and just makes me respect the song even more. But it was illuminating seeing all the comments on the song- none at first addressing the man in the long black coat as a priest telling us how vile and depraved we are, which was how I was hearing it this time. Again- everyone sees or hears what they want/need to....