So now that 2016 edition of blocks old love are done, it's time to move on to some mail art-Valentines!

Mail art (also known as postal art and correspondence art) is a populist artistic movement centered on sending small scale works through the postal service. It initially developed out of the Fluxus movement in the 1950s and 60s, though it has since developed into a global movement that continues to the present.


While I was creating the blocks, I threw out some papers, tag board that the print shop below me was recycling, and pages of text saying "love you" in different languages. I  had some fun pouring/ splashing/ spraying on them to use as collage fodder. 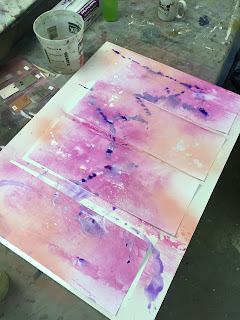 When I started screening on text and hearts on the blocks, if I had any extra ink on the screen,  I turned to one of the papers and added it where it seemed best. 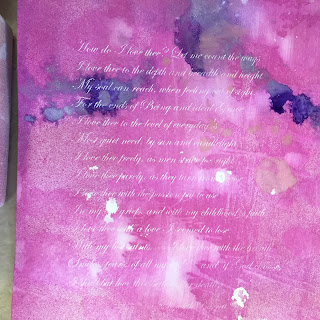 this is the poem "how do i love thee?"by Elizabeth Barrett Browning screen in white 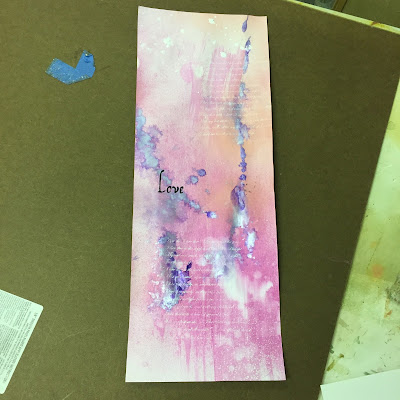 This one layers the poem over the pours, then the word love in a different font and color.

Once I had a nice assortment of papers, it was time to turn them into card size collage
compositions. 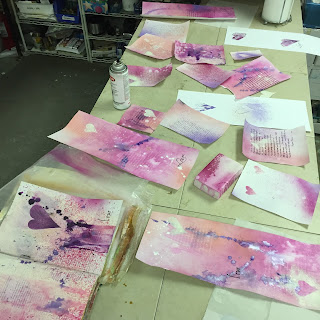 My favorite ways to do this is to use cropping tools. Even to an experienced eye, it can be overwhelming to select what portions of the piece to work with. I really love creating this way because it allows a very freeing start where you are not necessarily concerned with the overall piece, and are able to totally focus and react to what is going on in the surface. Later you'll evaluate and take what works, and either throw out or rework what did not. I do this on a bigger scale on clay-board and boards sometime. However, it's much easier to work with paper and just cut or tear rather than saw and sand before nailing, gluing and assembling. 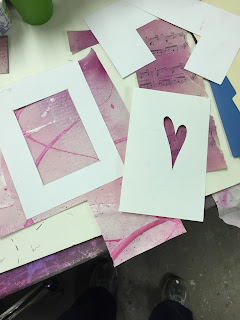 At any rate some compositions were very easy-All I had to do was tear out a rectangle, sometimes adding text or a heart, because i had already considered the compositions as i was layering on screens of text,  Others involved a bit of layering and stacking of hearts, and re-working- Il'l go into those next week!

Meanwhile, you of course want them to arrive in an artful envelope as well- so did a simple spray resist to liven them up. Got some fabulous stamps so just need to address and pop in the mail! 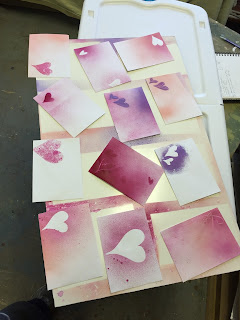 So here are a smattering of the first batch.... 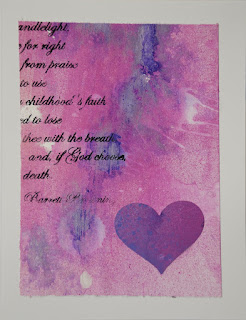 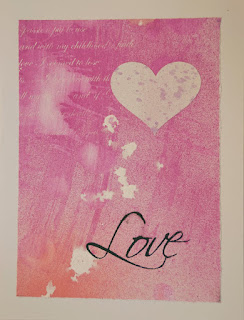 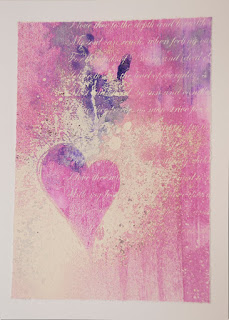 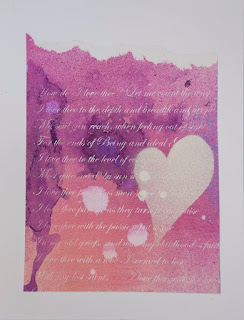 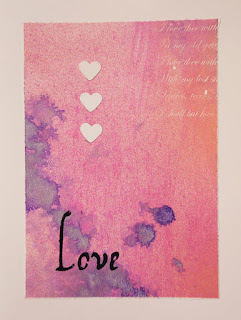