( These were scheduled to be posted while we were in Scotland and Ireland- but Blogger had different ideas. So- a little late but the art remains the same)

As you are reading this- I am now in Ireland!!  It is a big part of my heritage, but I noticed that the closer the trip got, the more my choices became Celtic ones.  I am going to show you what that looks like here!

I first became acquainted with Ogham characters during my first trip to Ireland almost 2 decades ago. While seeing the Book of Kells exhibition at Trinity College, these intriguing writings just grabbed me for some reason I can't completely articulate. I bought a postcard to remind me of the marks, (no photos allowed!) then found many other examples on various rocks and ruins during the rest of the trip. I came back and did a little research, and although I am not a linguist, this is my best explanation: It is an ancient alphabet whose characters are based on 12 trees. Found throughout  Ireland, archaeologists now think it might have been more widespread than that- because they've unearthed examples in north and south America that also contain examples of it.  At any rate- the following pieces have excerpts from the Book of Ballymote, in which the priests during the dark ages tried to record what knowledge and history they could preserve.  For some reason, in my mind's eye, a line of Ogham finished these perfectly! 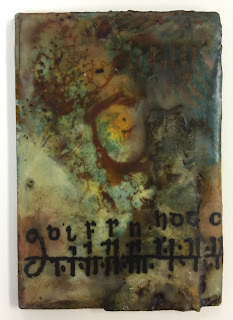 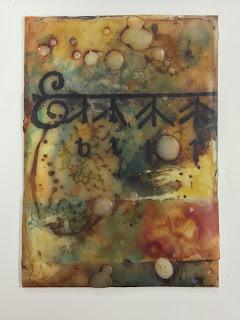 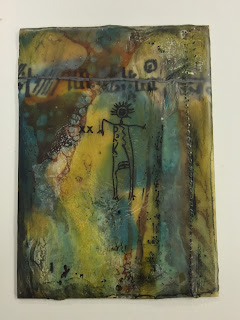 And then, of course, there is Irish music.  After having just seen U2 in concert a month ago, I am still reliving that concert via their songs while working at the studio!  So this piece once again started with alcohol inks on encaustic board- a lovely surface for encaustic. 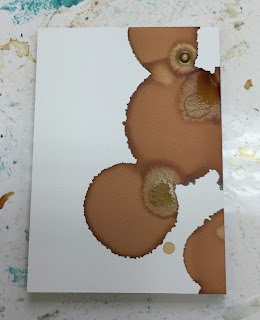 I added some contrasting pan pastel blue, then wrote in the U2 lyrics that were playing while I worked- a favorite song of mine-  "Walk On" 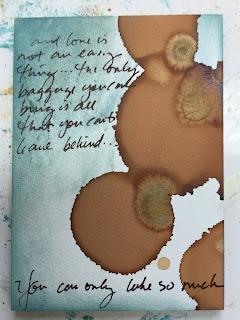 (All that you can’t leave behind is not just referring to actual luggage :) I collaged on a little strip from an old fossil book, and then waxed it. I then took a photocopy of some grasses, “auditioned” them on top of the piece, liked how it looked and what it added, so made a silkscreen of it. 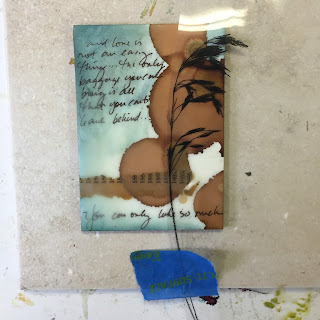 Screened it on, added another layer of wax, and stopped before I went to far!! 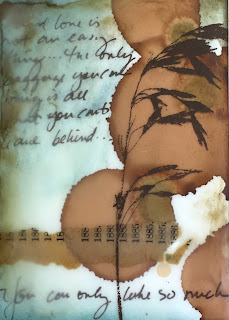 Here is Walk on -performed live at Slane Castle in Ireland. Imagine!